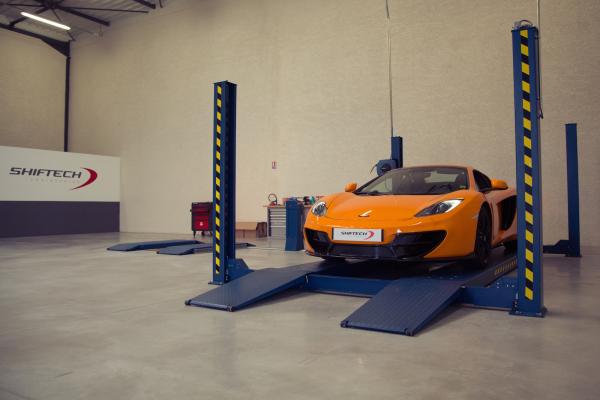 Equipped with a complete Innotech Valvetronic exhaust line and a dynamic intake, the McLaren was entrusted to Shiftech Lyon to try and get the best out of it.

Such an exclusivity, this McLaren was produced to celebrate Manufacturer’s 50th anniversary.

Only 50 spider version models were produced and were armed with a brand new carbon front shield, lightened rims and serial carbon/ceramic brakes. Under the hood the car is featuring 3.8 V8 bi turbo engine delivering 625hp and 600Nm.

On performances side two working days of development and dynamo sessions allowed us bringing respectively power and torque up to 704hp and 728Nm.

Motorist in charge talks about this optimization:

Getting behind the wheel of a McLaren is like penetrating a new dimension. As professionals on the engine optimization sector we meet the chance to test and review hundreds of car but none of them provided us with such an extraordinary feeling.

No doubt we are facing a genuine Supercar.

McLaren project was about getting in the game of mid-engine sport cars such as Ferrari’s or Lamborghini’s. To cope with their ambition McLaren put effort on weight reduction by building carbon fiber body. High resistance and lightness make carbon fiber an optimal material. Down to 1375Kg MP4-12C has a thrilling power to weight ratio that brings it up to the top of actual fastest supercars. Such lightness grants the car with an incisive and reactive chassis that allows precise driving and high corner speed. Moreover McLaren claims having the best power to carbon emission ratio heat engine in the world.

MP4-12C is equipped with a Bosch engine mapping calculator which allowed us accessing parameters and optimize them.

When MP4-12C was launched access to processing units was not adequately restricted and a breach would permit anyone to easily reach stored parameters. McLaren took therefore actions to replace processing units of already delivered models. Acknowledging no owner would appreciate such modification, McLaren did offer a power gain from 600 to 625hp for those who would let the unit be replaced. Meanwhile a new breach was discovered and motorist are once more able to access and optimize engine mapping parameters – including the P1.