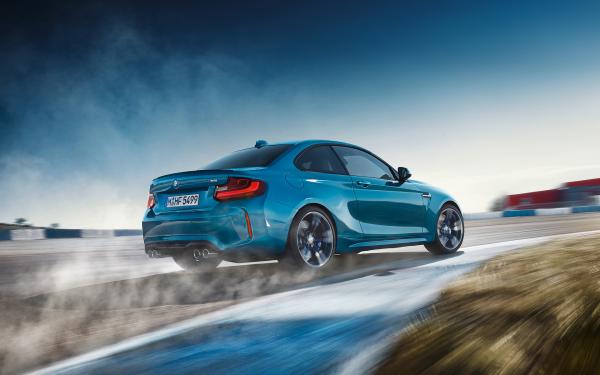 Only muscled M235i or real transformation?

How could one not be aware of it? It’s all over the place since October 14th 2015… The new BMW speedster has come out logically succeeding the 1M. As a reminder: since models names re-designation, even numbers are dedicated to coupé models.

So … M235i only muscled or real transformation?

Much work was performed on esthetics so that anyone can differentiate M2 and M 235i. 4 exhaust tail pipes (like the 1M), enlarged wings and aggressive front do not cheat. Which is the rebuke made to the new Audi RS3 especially looking at the wings. One can regret side mirrors identical on both M235i and 1M, rather conventional seats and the lack of carbon parts. M4 similar look would have been most welcome!

Change happened on the engine side as well. Unlike the 1M on which 3.0l bi-turbo N54 engine was simply picked from the 135i, M2 does not feature M235i engine. It rather picked parts as gearbox and undercarriage from the M3/M4.

It has been a while we wonder what will be the engine code of the 3.0T featured in the brand new BMW M2. Some did bet on S55 present on M3/M4, some others have sticked to the idea this could already be new 3.0 engine generation so-called B58. It will eventually be the N55 engine or more precisely N5530T0 that will equip the M2. The engine is based on actual M235i except for a few details. Engine actually got few M4 parts including strengthened pistons. Which is a good news since N55 fragility is well known as compared to the former N54 featured on the 1M. Engine block got also strengthened as it is now a closed-deck (M4-like). Transmission won’t be the ZF8HP45 proposed as an alternative to the mechanical 6-speed gearbox, but rather a 7-speed double-clutch box (M-DCT) from the M4 taking more than 700Nm torque. All this is really good looking for further steps…

And by the way... Let’s talk further steps. What could an optimized M2 deliver? Theoretically, aiming at 400hp coupled with 600Nm torque seems realistic. Limiting factor will obviously be the turbo but original intercooler as well … should it be picked from the M235i. Turbo will actually be the second limiting factor as it is able to deliver 430hp. Pressure rate of the fuel boost pump got reduced due to an excessive fuel flow close to 430hp.

Once more BMW did surprise all of us. They possess this ability to build a vehicle to be placed right between two already comparable models. Everything was planned, M2 has a lot more than the M235i but much less than a M4 to the extent that buyers looking at one model pretty well know that investing a little more money gives access to the better above model.

So it M2 a must? Of course it is. Featuring body kit, engine, limited slip differential, one would be wrong not to take advantage of it. Should you not have the opportunity to be amongst first acquirers you can always get the M235i at reasonable price and brighten it up with Shiftech optimization program. Such a lower cost compromise which will get you equivalent performances to the original M2 at least as proved by power curve here below.