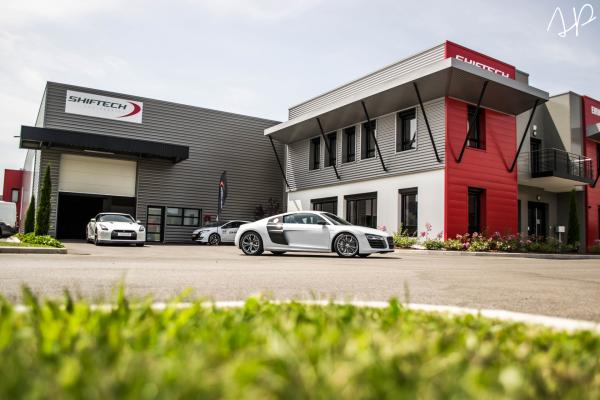 Since 2007, the R8 is the only supercar proposed by Audi. The “Plus” version is equipped with the same V10 engine as the classic R8 but it originally owns more power; it develops 550hp against 525hp for the classic version.

Beyond the announced power increase, V10+ is much lighter as some parts were carbon fiber made: side panels, rear diffuser, front blade, engine compartment decorative parts, mirrors cases and seats covers. Replacement of the complete original exhaust line by the Titanium Armytrix exhaust system lightened the car by additional 20Kg.

V10 sound brightened up by the Armytrix exhaust is simply amazing. Discover it yourself by checking out the video below.

Other good news is: The “plus” version features an S-Tronic 7-speed double-clutch automatic gear box and ceramic series brakes.

First session revealed original power was actually 537hp only. Through our experience, we do know most naturally-aspirated German engines do not deliver as much power as announced.

Following engine optimization, we can announce results as: 588hp and 541Nm.

As road tests were conducted prior and post optimization we confirm driving pleasure gain is indisputable.

“Typical Audi: “Plus” version does not overwhelm series’ performances and behavior, which was not the ambition. “

Audi’s aim rather seems to celebrate end of life model by proposing a limited edition. This little “Plus” on paper seems pretty useless but is however compulsory to the R8 enthusiasts.

Mechanically nothing changes, nearly... R8 engine is nothing else than the Lamborghini Gallardo LP-560 electronically limited to 525hp at throttle level for the original R8 and to 550hp for the “Plus” version. GT version however features the unbridled version delivering 560hp. It is therefore possible to electronically unbridle throttle and work on 560hp base on “Plus” version. By adjusting ignition and mixture at high engine speed we can reach few more extra hp. Imperative: 98 octane fuel to be used (sounds legitimate when driving such a car).

Most significant change is at the gearbox level. “Finally” as would express most gossips. The fact is R-Tronic robotized box did not get everyone happy and was lacking sportiness due to much delayed shift times. This “Plus” version features 7-speed double-clutch gearbox applying 85ms shift times; and that is the big change. Smoother at low load and much faster when requested the gear box gets the Audi R8 V10 wonderful.

Finally V10 delivers a sound that one might never forget and we are pretty happy to acknowledge that 5.2 V8 engine will remain in the R8 2015 catalog.