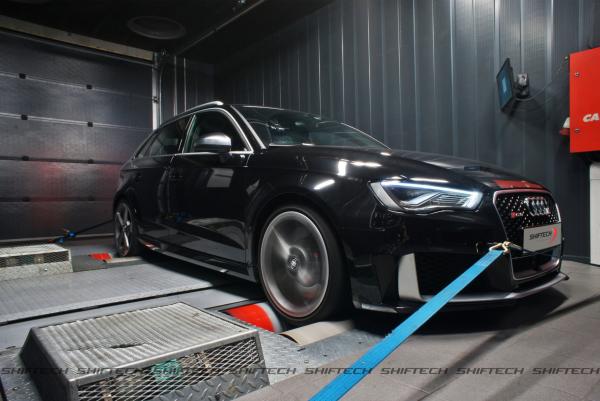 Sports compact for daily use

Such performances that exceed (is this a coincidence?) their main rivals as BMW 135i xDrive or even Mercedes A45 AMG.

Esthetically speaking, one can appreciate new front shield as well as oval exhaust tail pipes reminding us of the amazing Audi RS6 4.0 TFSI. One can however regret the lack of visual difference compare to the S3 especially looking at the wings that remain unchanged.

On transmission side: we can observe the new quick and intuitive S-Tronic 7-speed double-clutch box. And on top of that, thanks to the new exhaust valve system the original dynamic mode sound is simply amazing.

It is undeniable, latest ultra-sportive version of this compact model from Audi is well turned out.

Generally speaking the car reveals to be much more playful compared to former RS3 as distribution of masses and torque were significantly improved. As such, the Haldex (viscous clutch) can deliver up to 100% on rear wheels. Transverse engine still does not help positioning the car in corners and the (although) reduced latency between front-wheel drive and four-wheel drive jeopardizes sporty feeling.

Launch control bursts of speed remain explosive and literally leaves BMW 135i behind should it not be an xDrive. Engine is soulful and we can thank Audi for doing no sacrifice of the 5 cylinders engine against 4 muscled cylinders. Although Mercedes A45 AMG engine delivers an incredible power/weight ratio, Audi 5 cylinders engine sound remains unique and we might miss it quite much in regard to the next RS3 generation … So let’s drive it now!

You got it, the present RS3 is made for mature audience looking for sober though efficient vehicle gifted with reliable engine that delivers pleasure and satisfaction upon each and every acceleration. Driving an RS3 does not require to be a racing driver as the car handles and forgives driver’s mistakes while giving a safe feeling through front-wheel drive behavior.

Looking at performances RS3 works well as proved by figures. As comparison: Mercedes A45 AMG although gifted with similar power does not provide with such a boost feeling being much more significant on the RS3.

What can be obtained from optimizing this speedster’s engine parameters ?

Additional torque erases linear effect that is early available and remains present all along the large engine speed range. To that extent we can only be grateful to the new turbos that enable early loading and keep boosting further and further. That’s not all: RS3 is eventually delivered featuring an efficient intercooler (unlike RS3 8P) that enables holding much pressure at high engine speed. This translates into a clear power increase post optimization. 410-420hp are therefore achievable without any mechanical operation.

Do you want more ?

Parts manufacturers are already on their toes willing to provide larger diameter exhaust line as well as a sport catalytic converter enabling 10 to 15hp additional gain together with more pleasant sound.

Should you give way to the RS3 ?

Should you own the actual RS3 and be in love with 5 feet sound? The new version is indeed made for you. It is the latest 5 cylinders engine available out on the market. So many vehicles are already present on that segment, arrival of the RS3 was not really predicted.  BMW M135i are being sold like wildfire since 2012. Winning combination: Sober and sporty line, responsive 6 cylinders in-line engine, all mounted on a well-balanced chassis. Moreover customers get the choice: rear-wheel drive or xDrive system (identical to Quattro). Mercedes A45 AMG works well but feels too little in terms of communication. It feels sterilized at all levels apart from the exhaust where AMG did work well to get such an appreciable sound coming off a 4 cylinders engine.

Final debate: rather Quattro or XDrive ?

Before debating be aware there are two types of Quattro.

First Quattro mounted on entry-level cars (A1, A3, TT, etc) is pretty low-cost. It actually is the Haldex system being is a viscous clutch that triggers rear wheels as soon as ESP detects grip loss. This is the Haldex system last-generation mounted on the actual RS3. Advantage of such system is to keep front-wheel drive for non-sporty riding style preserving low consumption.

Second Quattro type so-called Torsen is dedicated to longitudinal engines featured on A4, A5, A7, etc. It is a permanent four-wheel drive able to adjust front and rear torque according to defined parameters. Torsen model is much heavier but remains more efficient.

Haldex most significant defect: vehicle is behaving as a front-wheel drive rather than a full four-wheel drive.

Willing to limit such phenomenon occurring on former RS3, Audi even mounted 235 wide front tires and 225 wide rear tires… Such a particular way of doing.

New RS3 is better built and balanced and benefits from 55kg weight reduction. Those improvements all together help the driver forget about understeering behavior of the former RS3.

But then, what is xDrive? Shortly, xDrive is the complete opposite. Vehicle is a four-wheel drive with continuous variable distribution that keeps pushing towards rear-wheel drive. Beyond 120km/h rear-wheel drive is on. Should the ESP notice a grip loss torque is sent to the front wheels. Playful driving style is back and vehicle may tend to oversteer at corner entry to then naturally recover front wheels grip. Should we compare Haldex and xDrive through the present case, xDrive is sportingly much better. Let’s anyway strip away such Torsen and xDrive comparison that cannot be fully covered within few lines only.