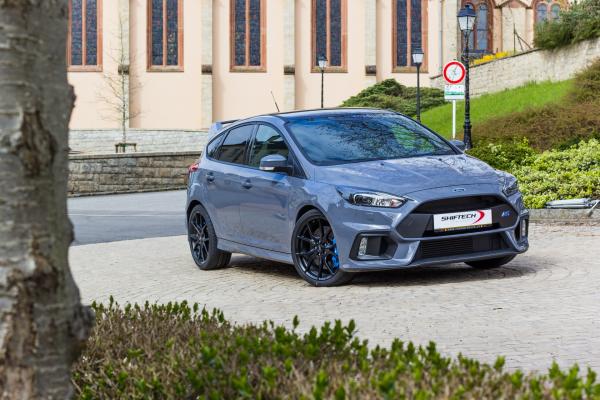 As a World Premiere, Shiftech has worked on improving performances of the brand new Ford Focus MKIII powered by an Ecoboost engine originally delivering 350hp and 440Nm.

Days of fine tuning engine parameters were necessary for Shiftech to respectively bring power and torque up to 380hp and 586Nm. Such a significant improvement that should thrill happy owners of this new speedster.

Just as other optimization programs delivered by Shiftech Engineering, the present chip tuning was entirely developed on certified dynamometer and was approved through live road test.

Our engineer talks about the new Focus RS:

Exhaust: “Exhaust sound is a real delight coming off an original 4 cylinders just as the pipe detonation when running sport mode. I just can’t wait getting the Focus RS MKIII back from Milltek featuring their brand new exhaust system.

EGT (Exhaust Gas Temperature) only delivers a maximum of 700°c which is simply excellent.”

Turbo: “This is, according to me, the restrictive factor as same restrictions were faced with Focus ST model: Much torque - limited power. However, no over-heating was noticed … which is why I remain cautious about it. Unfortunately I have no up to date VCM to log the wastegate duty and assess whether there is some room left. But to me, we will hardly gain more than 1.5 bar at high engine speed.”

Ignition: “We are facing a low engine size coupled with a high compression rate. Ignition system is obviously not the greatest we have seen compared to what could be found on the former Focus RS. A decent 8° ignition is the utmost and it won’t accept more. Just make sure to feed your speedster with 98 octane fuel at minimum.”

Mixture: “As all direct injection systems the present engine originally runs quite lean mixture which increases as we reach certain temperature threshold. When running original parameters the mixture reaches 0.71 lambda at high engine speed. Considering exhaust temperature it does not make sense to run that a rich mixture on direct injection system engines. A decent 0.82 lambda seems satisfactory to me as it does enable a 5hp gain which is really worth the effort compared to the total power gain.”

Software version: “We are all aware MKII benefited several engine updates; main ones being the CJ and the latest CL. The latter correct power issues as well as inlet damages. Software version of the MKIII subject to our optimization program is already the CG version which is the fifth and latest software version dedicated to this Ford RS. But it seems to me that little development and correction were added prior to shipping…”

Conclusion: “When driving most satisfaction comes from the torque. I’ve had the opportunity to drive the MKIII and, regardless the measures, original performances are (way) too linear. When looking at the speedometer one might feel like going “fast”, but driver does not get what was delivered by the MKII which was much wilder. It does remind me of the A45 AMG. What is brought by Shiftech engine optimization is this; driver enjoys re accelerating, feels such a boost and, whilst the nearly 600Nm were barely handled on the MKII, such torque is smoothly run by the MKIII. As an engineer I’ve had the chance to drive hundreds of vehicles and I honestly admit Shiftech optimization brings a lot more to engine performance and pleasure of driving (why not to feature such improvement on the original manufactured MKIII?). One might say I look like promoting my own cause but it only takes one to drive it to deeply understand my speech. 375hp is not an extreme performance but it surely is enough and 10 to 15 more hp would not really make a difference.”