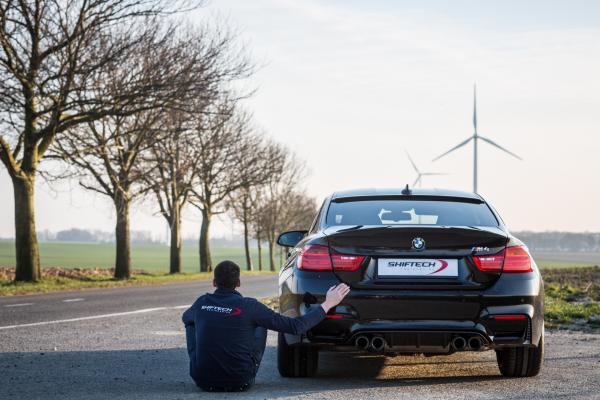 As a preview, February 20th 2015, Shiftech was already able to optimize M3 F80 up to 513hp and 689Nm as a result to a deep review of electronic engine parameters.

A month later Shiftech worked on her little sister M4 F82 and results were just as amazing. Following a whole day of optimization and dynamo sessions power and torque of the sheer beauty M4 were respectively brought up to 531hp and 701Nm.

Now what are the most significant changes?

I almost want to say “everything” as many changes were brought. Engine does not include single twin-scroll turbo anymore but rather two single-scroll turbo’s. Moreover first obvious thing under the hood is air/water exchanger that maintains intake temperatures at the lowest. Becoming a trend such system was already introduced on Audi RS6 and M5/M6. Technology is now being established on smaller engines and we won’t complain about it. Of course the lower the intake temperature the smaller the auto-ignition risk. As BMW has decided to take the big next step by leaving behind melodic 4.0i V8 it was crucial to develop new turbo engine exploitable in all regions and which reliability could not be called into question when out on track.

Regarding changes engine block was entirely forged and boring as well as piston course were modified bringing engine size up to 3.027cc instead of 2.979 on the former N55.

Looking at engine parameters mapping Shiftech voluntarily decided to limit torque to 700Nm in order to preserve mechanics of the excellent DKG 7 speed gear-box as well as sustaining its potential on road. Intercooler air/water works perfectly (between 30 and 40°c only) which enables several dynamo sessions with no heating consequence. This translates into constant ignition pace and under control pressure rate. Exhaust temperatures get close to 800°c which gives room for future optimizations stages.

On road, optimization program is reflected through wild though linear boost as much as it feels it won’t get down. It is important to strongly hold the wheel when accelerating hard otherwise risking to lose rear grip. M2 mode that consists in deactivating all driving assistance systems is dedicated to smart drivers as 700 Nm on the rear, M4 proves to be more oversteering than ever.

Looking at BMW M4 GTS, Bavarian manufacturer is about to introduce new cylinders water injection system that would reduce cylinders temperature and de facto increase ignition at equivalent pressure rate. This technology is nothing new but would be première on series vehicle.  According to BMW the technology applied on an M4 might deliver 30 to 40 extra hp.

EDIT: The information is now confirmed, new M4 GTS power is brought up to 500hp thanks, among other things, to this water injection system.