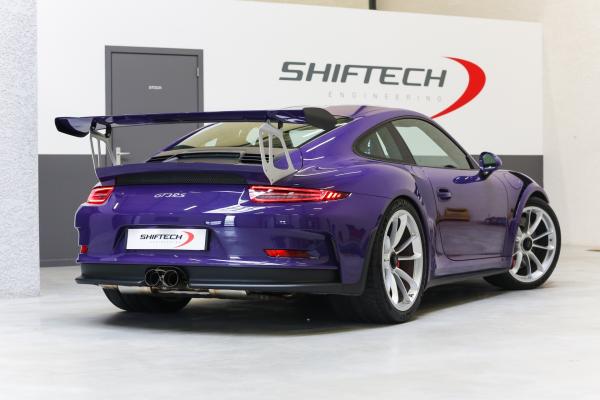 We have had the huge privilege to welcome within our premises one of the 2016 high-performance supercar: the new Porsche 991 GT3 RS.

If you think a 991 GT3 Porsche is rare, RS version, the ultimate version of the 991 is even more as the production is deliberately limited to 2100 copies worldwide.

Question is: Why GT3RS ?

One could wonder what could the GT3RS bring more than the GT3 being already quite outstanding. GT3RS offers you the very best, 4.0l engine replacing the former standard GT3 3.8l including upgraded intake and now being able to sustain up to 8000rpm. Esthetically GT3RS is very much identifiable to the roll bars, larger rear spoiler, wider tracks, 21 inches rear rims (325 wide) and finally: front wings air intakes. All those changes bring considerable improvements in regard to the grip and low-end throttle response. It is also necessary to consider the net increase of 25hp and 10kg weight reduction by means of magnesium parts.

Result: Nordschliefe lap is made in 7m20sec which is 7 sec below former 4.0l.

Get Shiftech optimize the GT3RS? Why not !?

While it seems obvious to choose GT3RS over the former GT3 it remains less clear on why to get the engine mapping optimized. This reflects most common reactions we receive about such supercars. It is important to know that whatever the car, as soon as you have tried Shiftech optimization program it gets hard to do without it. Accelerator touch, acceleration feeling, low-end throttle response, are all together quite a delight. Even though the latest RS is already the result of an advanced optimization from Porsche, there remains room; especially if the car is equipped with IPE exhaust system which frees exhaust gas flows.

Which parameters to optimize in order to increase the gain? Naturally-aspirated engine do not offer much choice. More air has to be brought, adjust the mixture and potentially move the cut-off. This is what we mainly do. In order to increase air intake we adjust the ignition further which will open the valves longer and induce more power. In fact this translates into ignition increase by 1.5° under 98 octanes fuel. Regarding the mixture … it remains lean as long as exhaust gas do not reach certain temperature level in order to meet European standards. As soon as temperature threshold is reached engine mapping gets from richness to enrichment increasing performances by means of a more efficient air/fuel ratio. We therefore chose to get the mixture richer before it reaches enrichment. This gets the vehicle more responsive and decreases the gap between richness and enrichment which will prevent from having a too large temperature delta at exhaust temperature level.

Remaining factor is increasing the engine speed range. Original maximum is 8800rpm. It is possible to get it up to 9000rpm but concretely the gearbox will shift up at 8900rpm. Only 100rpm are gained which actually is enough to go get a little more power.

Different parameters together with certain load and throttle limits will enable the vehicle (equipped with a full IPE exhaust line) to develop additional 28hp and 28Nm. Such a low score on paper resulting in a much better response by means of an improved mixture.

Noting that GT3RS got sold out before it got commercialized raises questions.

First one being: How do I get the car? You need to know it is pretty much not possible to the average citizen should he although own the required 185 000€.

What’s the reason? Porsche is having the wind in their sails and do not wish to sale vehicles that would be vulnerable to speculations. So, in order to buy the GT3RS buyers are required to possess a former GT3 or former generation GT3RS.

You could still acquire a 250.000 or 300.000€ GT3RS sold on internet even though Porsche goes pretty much against such practices.

Second legitimate question is: Who would dare driving a 300.000€ vehicle on a race track? It is actually such a rarity (considering the high resale value) that one can wonder if there are still purists out there willing to ride those supercars on tracks.

With those limited edition cars (not even talking about the brand new 991 R limited to 991 copies) is Porsche trying to increase speculation at the expense of driving pleasure? What is the aim of selling high-performance vehicles that will eventually increase their value by being stored in a garage? This might seem excessive statement but we can bet only few of those GT3RS will be seen on racing tracks or even on roads whilst more than 2100 copies were produced worldwide. Although the amount of 2100 copies is not really significant, I have personally met 3 Audi A1 Quattro on roads even though the production is limited to 333 copies.

Whatever, this latest generation GT3RS is an exceptional vehicle. Having the chance to see it, trying it and optimize it is a real pleasure. Pleasure shared by the owner who is planning on riding the GT3RS and not willing to let it “rust” in his garage. Such pleasure is hard to share with you folks and this is why we created the below video revealing engine optimization process and giving you the chance to listen to the acoustics produced by the IPE exhaust line. Do not hesitate to look at it and share should you like it.